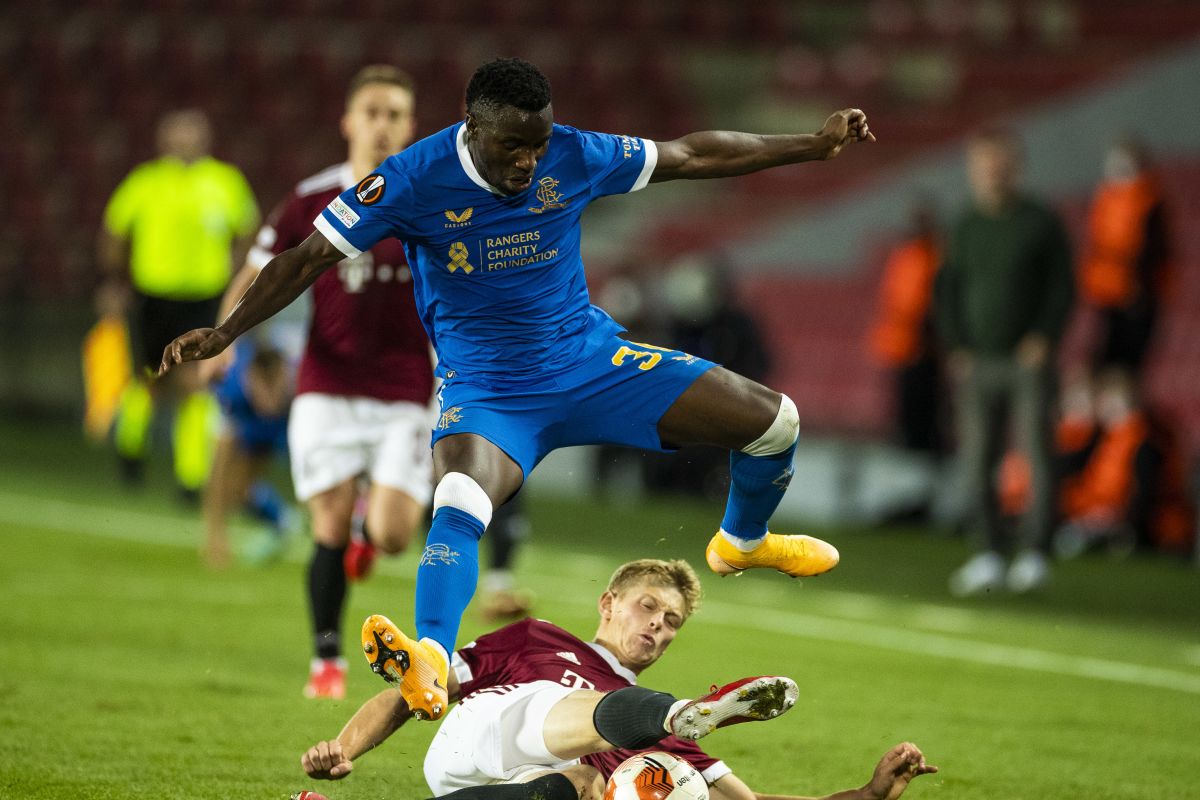 The RANGERS lost in the Europa League tonight, losing 1-0 at Sparta Prague.

David Hancko’s tech-rewarded lead in the 29th minute made the difference between the two teams in the Czech capital, with Gers still chasing their first points in Group A.

Manager Steven Gerrard has named five changes to his squad – from the team that won at Dundee on Saturday came Allan McGregor, Borna Barisic, Juninho Bacuna for his debut, Steven Davis and Fashion Jr.

That meant it was a McGregor back-five in goal with James Tavernier, Leon Balogun, Calvin Bassey and Barisic ahead of him.

Bacuna and Davis came in midfield alongside Glen Kamara, while up front Joe Aribo and Kemar Roofe played in support of Fashion Jr.

The Rangers started the game with some control, albeit on what appeared to be a dangerous playing surface with so many players in blue losing their footing in the opening minutes.

But after 10 minutes, the game’s first big chance fell on the way to Sparta – Jakub Pesek getting the ball break at the turn at the 18-yard line as the Gers made a big time out of a clearance, but McGregor was in great shape again to return his effort as he made his way to the top corner.

Fashion Jr had his first chance to run behind on an Aribo ball soon after, but from a tight angle he could only shoot straight at goalkeeper Florin Nita.

Filip Panak did well to get a peek from Aribo’s header, but the Gers continued to dominate until he was hit with a punch in the 29th minute.

From a corner, David Hancko met the ball at the front post and peeked it through the goal, the ball hitting the far post and looping just above the line – the technology of The goal line judging that the ball crossed the line before McGregor could bail it out again.

The Gers settled down again to regain their dominant status in the game, but couldn’t force further opportunities, despite taking a heavy blow with Bacuna being forced to strike and Ianis Hagi having to take his place before the break.

Sparta missed a glorious opportunity for number two almost straight from the kick-off in the second half – Adam Hlozek cleared and fed Lukas Haraslin – and with McGregor blocked and facing an open goal he returned his effort from the bar to 12 meters.

On the other side, Fashion Jr had the ball in the net – hitting the rebound from a Balogun header at the end of a Tavernier corner, but he scored from an offside position.

Possession of the Gers was starting to show in more advanced areas, but again the best opportunities fell on the home side – Haraslin going through the middle but being denied by McGregor.

Hagi tested his international teammate Florin Nita with a decent effort of 25 meters, before at 76 minutes Glen Kamara received a second yellow card as the referee felt he had caught Michel Sacek with one arm.

It was tough, and left the Gers an even bigger task in what was left of the game.

Despite this, they continued to fend for themselves and Fashion Jr had another opportunity in added time, but was turned down by Nita.

Sparta however held firm to move up to four points, with the Gers now facing a brace with Brondby, with the Danes sitting on a point after the loss to Lyon tonight.