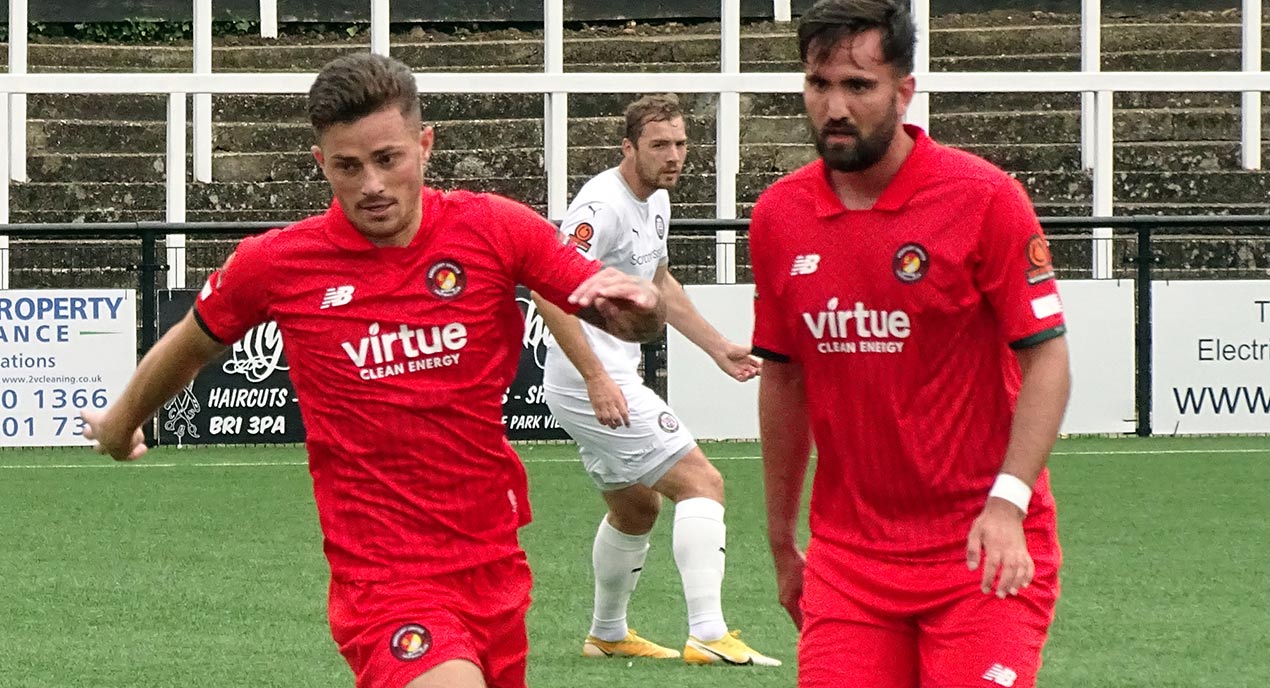 The Cray Wanderers stand in the way of Fleet and another Cup race this season, with the Isthmian Premier club welcoming Dennis Kutrieb’s side to Bromley FC’s Hayes Lane this weekend.

The Wands, one of the oldest clubs in world football, will try to reach Round 3 of the Buildbase FA Trophy for the first time and do better than last season when they faced St Albans City.

The fleet will be more than familiar with the 3G surface at Hayes Lane, having played two friendlies there earlier this summer (photo above). After naming an unchanged eleven against Maidstone United midweek, Dennis Kutrieb will likely make some changes for this one with a number of players returning to the roster and considering a return.

Sefa Kahraman sat on the bench for the last two games due to illness while Jack Paxman and Will Wood completed their suspensions, with Paxman getting minutes against his former club on Tuesday. Add in players like Kieran Monlouis and returning players including Adam Mekki and Christian N’Guessan, and once again there are opportunities to mix things up on the fleet side.

And Michael West has good reason to remember Cray as he is the sole survivor of the clubs last meeting in the 2010/11 FA Cup, when the Wands took Fleet to a rerun. They led in the original draw with nine minutes left before Fleet equalized, then missed a penalty in the dying minutes. And during the replay at Stonebridge Road, West scored and missed a penalty as Fleet won 4-2, with Cray firing back 2-2 to 2-0.

Such drama this weekend can be diluted by the fact that there is no rerun, with the draw going straight to penalties if the scores are tied at 90 minutes. Progressing through the trophy is the visitors’ goal this Saturday and Kutrieb will field another strong side as he has done throughout the early rounds of the FA Cup.

Cray, of course, enters the field with many familiar faces by his side, the four former Fleet men in their ranks being part of our previous promotion team. Anthony Cook and Marvin McCoy will likely start, while assistant manager Andy Drury may well join them after being rested in Cray’s midweek championship game. Fourth, Danny Kedwell, will lead the shots from the sidelines with his playing time this season limited to a handful of cameos off the bench.

Loanee Kassim Aidoo has already played against the Fleet this season for the Borough of Eastbourne, while Cray has also just taken on attacking midfielder Sam Skeffington on a temporary contract from Bromley – although it remains to be seen if he has permission to play in the trophy.

Cray’s season has got off to a great start with impressive wins over Lewes and Hornchurch, but injuries have taken their toll on Kedwell’s squad as the campaign unfolds and the Wands find themselves in the bottom three. Nonetheless, they scored a useful point midweek at home against contenders for promotion Folkestone, all three of whom were denied only by a late goal, and like Fleet tasted victory at Carshalton Athletic.

In previous trophy rounds, Cray sent Kings Langley 4-1 and Bedfont Sports 2-1, the top scorer so far in 2021/22 being Cook with eight goals, a few from the penalty spot. They’ve averaged 190 crowds this season, but with local interest and the number of travelers in the fleet, the tie is expected to surpass their highest gate of 305.

Aside from the aforementioned FA Cup clash, Cray and Fleet didn’t share many competitive exchanges, the others being a 1968 FA Cup draw which Fleet lost and the Kent Senior Cup final. 2008 which was won 4-0 the same year we lifted the trophy at Wembley.

Cray has spent much of this century between the Isthmian Premier and First Divisions, their latest result being as the South East Division Champion in 2018/19. Two seasons have since been lost for Covid, the first of those with Cray in second when the campaign was scrapped.

• Advance tickets costing £ 10 / £ 5 for Saturday’s match can be purchased online here, or purchased the same day. U16s are free with a paying adult.
• The tie winners will be drawn on Monday for the third round, which will be played on Saturday 18th December.