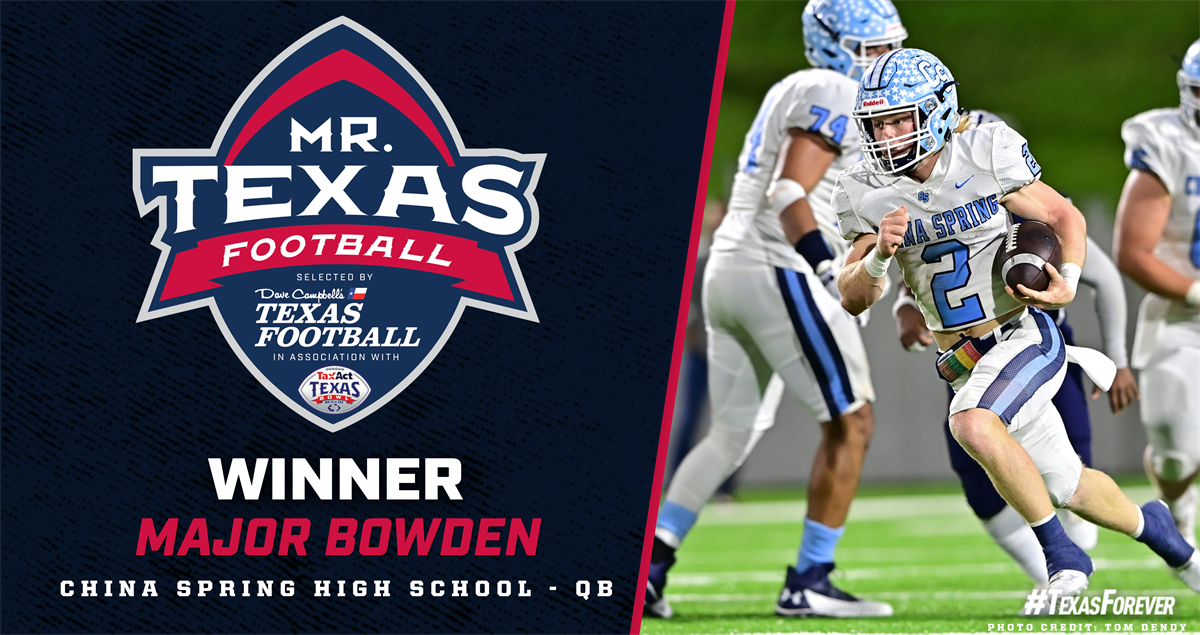 HOUSTON – Texas Football by Dave Campbell, the leading publication on all things football in Texas, and the TaxAct Texas Bowl are proud to announce that Chinese Spring quarterback Major Bowden is the recipient of the Mr. Texas Award. High School Football Player of the Year 2021. Bowden will be honored on the field at the TaxAct Texas Bowl on Tuesday, Jan. 4 at NRG Stadium in Houston, where the Kansas State Wildcats face the LSU Tigers.

Bowden, a 5-foot-9, 175-pound quarterback, is perhaps Texas high school football’s most valuable player as a senior, running 1,866 yards and 23 touchdowns – averaging 8.4 yards per carry – while completing 67% of his passes for 1,432 yards and 27 scores. His Herculean efforts took China Spring to all-time highs: the fourth unbeaten regular season in program history, the first 16-0 season in school history, and the inaugural China Spring State Championship. since 1978, when Bowden won offensive MVP honors. The driving force behind the Cougars’ meteoric rise, Bowden led China Spring to victories over heavyweights Carthage, West Orange-Stark, Cuero and Gilmer in the home stretch for the 4A Division II title. Bowden’s remarkable tenacity and incredible game make him a worthy recipient of the 2021 Mr. Texas Football Player of the Year award.

For more information on the Mr. Texas Football Award, visit TaxActTexasBowl.com or TexasFootball.com.

About the TaxAct Texas Bowl

The TaxAct Texas Bowl is owned and operated by ESPN Events, a subsidiary of ESPN, and locally managed by Lone Star Sports & Entertainment. The bowl has featured teams from the Big 12 and the SEC, two of the nation’s biggest conferences, since 2014. The TaxAct Texas Bowl has been a huge success both on and off the field for its first 14 years. because it is the fifth most attended a bowl game in the country since 2016. The bowl generates over $ 30 million per year for the Houston economy and has donated nearly $ 2 million in financial support and millions more in promotional support for DePelchin Children’s Center, the official charitable recipient of the bowl.