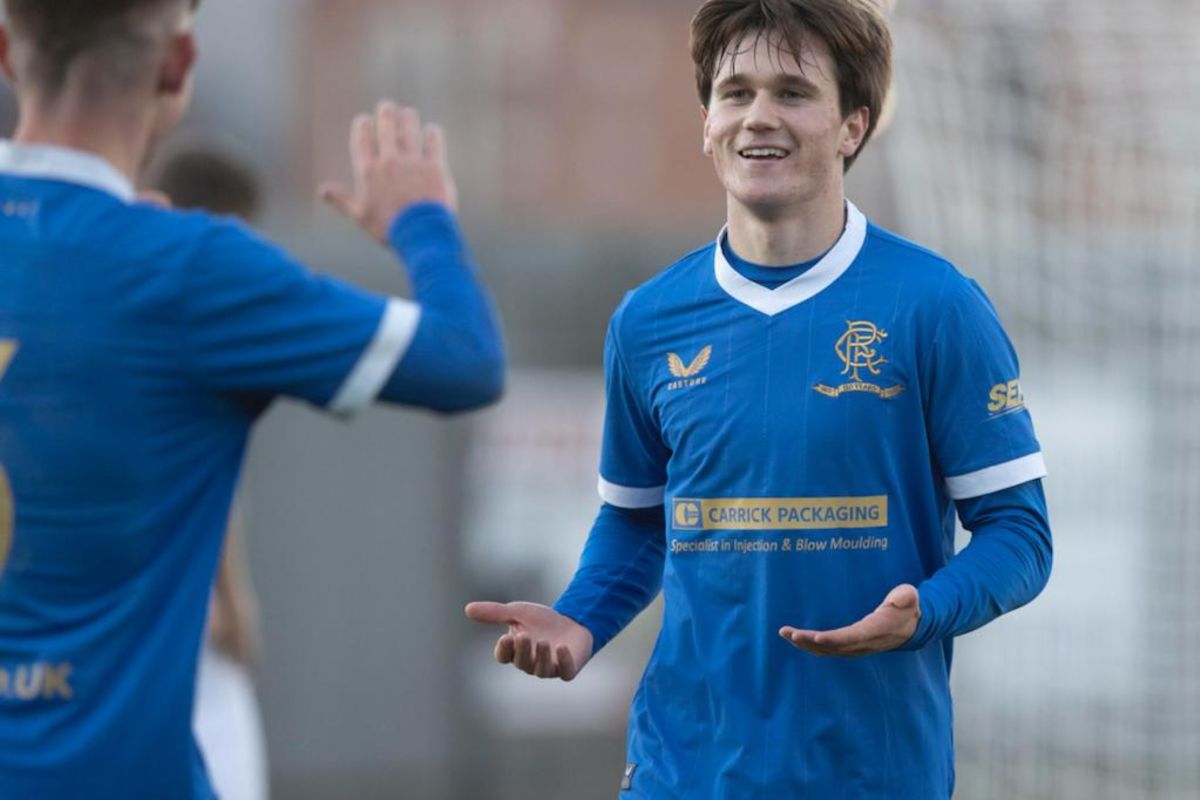 The RANGERS B team have collected three points in the Lowland League after beating Broomhill FC 5-1 at Dumbarton Stadium.

Two goals from Charlie McCann and Tony Weston, and one goal from Kyle McClelland saw the young Gers show their development after another positive result and performance in the league campaign.

The Light Blues returned to familiar surroundings today as they continued their league run against David Gormley’s Broomhill side in front of home fans.

Six changes have been made for this afternoon’s game, with Lewis Budinauckas replacing Aaron Cervantes in goal.

Murray Miller, Cole McKinnon and Charlie McCann were in the middle of the park, with Tony Weston, Alex Lowry and Ross McCausland in the lead for the young Gers.

The youngsters started positively from the kick-off and comfortably controlled at the start of the match. They remained patient on the ball, dominating possession to create several chances against the visitors.

The first noticeable effort came in the 12th minute when Ross McCausland and Tony Weston teamed up nicely to head towards the visitor’s goal. Weston played a nice ball to McCausland, who managed to find space with the ball inside a crowded Broomhill area, but his shot was deflected and sent right past the goal.

The youngsters didn’t have to wait long before their possession and early dominance paid off and it was Weston who opened the scoring in the 17th minute after a nice cross from Robbie Fraser. Alex Lowry delivered a superb pass from the middle of the park to Fraser running down the right side, the youngster crossed the baseline to send a superb ball to find Weston who managed to get it past Jamie Smith.

A few minutes later, Charlie McCann found the second after hitting the back of the net. The Light Blue recovered the ball at the edge of the box, found a little space before unleashing a powerful strike in front of the keeper.

The youngsters continued their patient efforts as they entered the final five minutes of the first half, which almost saw McCausland score the third for the Gers. The forward recovered the ball from Broomhill’s box and pushed towards the front post, but his powerful shot was blocked to deny him a goal.

In the 41st minute and against the run of play, Broomhill reduced the lead to one with Lewis Crawford scored for the visiting team, after his shot was deflected past Budinauckas. The young Gers continued their momentum in the second half to maintain their lead.

Kyle McClelland found third for the Light Blues in the 51st minute, after McKinnon delivered a dangerous ball to connect with a towering McClelland to send him to the back of the net.

Soon after, Lowry recovered the ball and advanced into the box and cut the ball off the front post to an unmarked McCann. The youngster took a confident strike to find his second goal of the afternoon.

Weston found the fifth and his second goal soon after, the youngster was able to intercept Jack McCalman’s pass and push into the box to challenge the keeper. Weston managed to calmly pass Smith from a powerful low shot.

The Gers continued to put pressure on Broomhill’s final third by pushing into the baseline. Kane Ritchie-Hosler did well to create a chance from the right wing, with McCausland hitting the back of the net with one, but ultimately declared offside.

Team B continued to work their way towards the goal and stressed their willingness to maintain momentum until the final whistle. McCausland picked up the ball from the edge of the box and fired a shot towards the goal, but it was only inches from the crossbar.